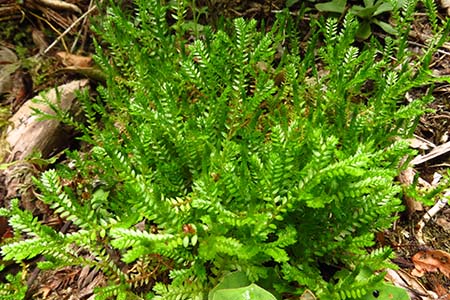 African Club Moss (Selaginela kraussiana) is tricky to spot because it looks like many native moss and leafy liverworts. Take a closer look and you'll know it by its neat rows of leaves (2-4mm), fine roots, and creeping, slender, irregularly branched stems that root at the nodes. Its spore cones are rounded (10mm long). You'll find it on forest floors, hogging higher light levels from native plant seedlings, and paving the way for more aggressive weeds, especially vines. This invasive moss species may seem innocuous, but can destroy native ecosystems by not allowing native plants to reproduce. You'll find them in disturbed forests and shrubland, streamsides and fernland.

How does it spread?

It spreads very quicly, growing on the ground or on the trunks of other plants. It has a high tolerance for extreme temperatures (hot and cold), but prefers light to deep shade. It needs to stay reasonably damp or wet in order to survive. The most common way of spreading African Club Moss is from boots, livestock, water movement and dumped vegetation in contaminated soil. Its spores and stem fragments travel well and can be accidentally transported on tracks, streams, contaminated plants and potting mix from unsuspecting nurseries and shops.

African Club Moss is difficult to get rid of because it spreads so easily. Before you start, make sure you have a plan on how access the area without stepping on the moss because its spores and stem fragments is one of the primary ways it spreads. Pull out small areas at a time and spray with 100 mL glyphosate mixed with 2 g metsulfuron-methyl 600g/kg and 10 mL penetrant/10L. Follow-up every 3-4 months until the site is clear. Alternatively, you can also spray with glyphosate (20mL/L).

Make sure you dispose of the moss at a refuse transfer station, or burn it or bury it deep in the ground to prevent regrowth. Peg cleared sites so you can follow-up. Keep tracks clear. Tiny fragments are persistent and difficult to find.