Sparrows, blackbirds and starlings are the worst non-native bird species for our native biodiversity. Other introduced species on the Miramar Peninsula, such as yellowhammer, chaffinch, goldfinch and green finch do not seem to be causing large ecological problems, so far, although they do spread weeds and some diseases.

To discourage non-native birds plant native species and resist the urge to put out bird seed or bread. Birdfeeders in the shape of tables might look nice and cute, but are not to recommend. These birdfeeders can spread diseases, especially if the bird can walk around the food and contaminate it with their faeces. It is better to provide natural food sources, see our fruit/nectar calendar and Zealandia's 'Feeding birds at home'. 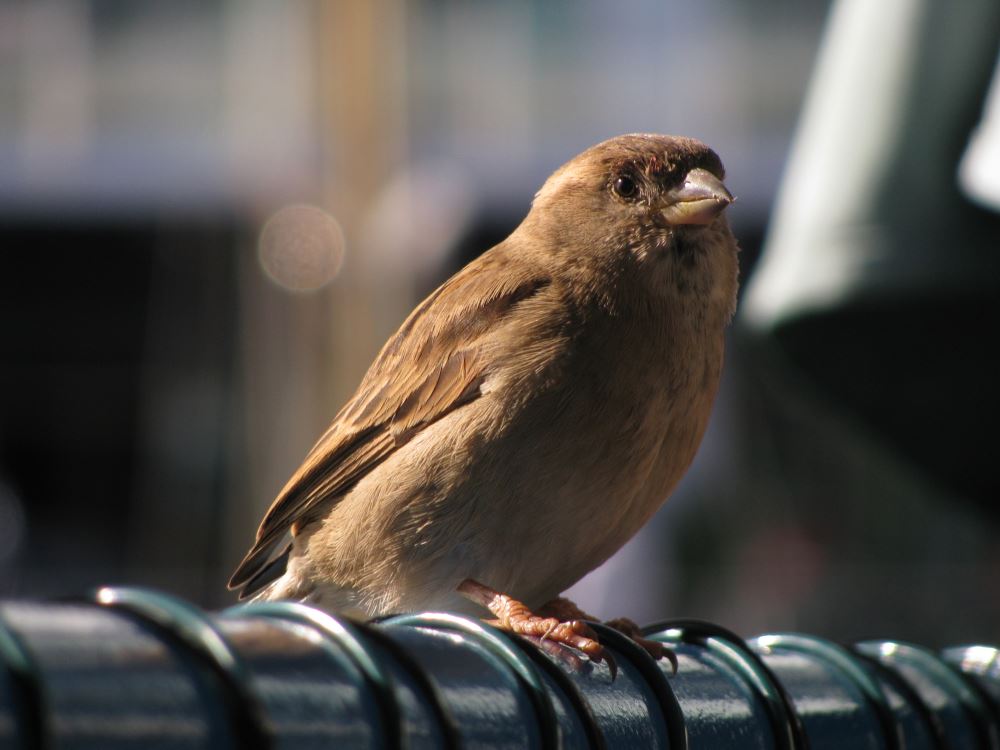 You may consider sparrows to be rascals rather than pests, but many people wish they had never been introduced. Sparrows compete with native birds, bossing the smaller ones away. They build large, untidy nests in hollow spaces, favouring gutters and areas behind fascia boards. The nest can be more than a nuisance, creating a fire hazard and spreading bird lice. Sparrows are also unpopular with farmers.

The more introduced plant species you grow in your garden, the more attractive it will be to sparrows, another great reason to use only native plant species and encourage native New Zealand birds rather than these pests.

Feeding sparrows with seeds can spread weeds and create a focal point for disease. 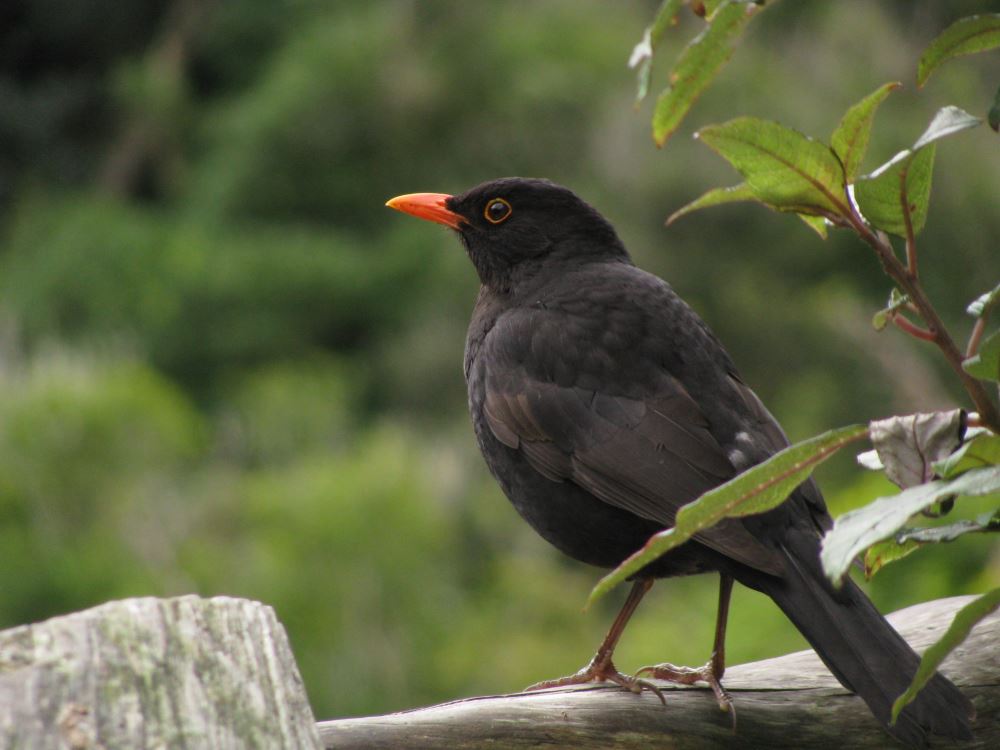 Blackbirds eat a wide range of native animals such as small skinks, geckos and bird chicks such as fantails. Blackbirds are one of the few introduced bird species that have invaded deep into native forest. Their diet includes fruit and seeds, including weedy species such as blackberries. They can consume large fruit, even the locally non-native karaka, spreading weeds up to 4 km away, deep into native bush and even islands.

Feeding sparrows with seeds can spread weeds and create a focal point for disease.

Starlings are one of the worst introduced bird species. They have become a problem for both agriculture and the environment.

Starlings are aggressive and tough nest competitors, kicking out and occupying the nests of both kakariki (parakeets) and the burrows of kingfishers. They tend to nest in groups, which makes it even harder for native birds to find a suitable hollow. At one time on Matiu/Somes island, 22 out of 30 kakariki nestboxes were found occupied by starlings. The starling’s nest is large and untidy with mixed grass and feathers and often full of itchy lice. As with sparrows, starling nests are a potential fire hazard.

Starlings spread weed seeds, from ivy to karo, across areas up to several kilometres away, often to beach areas and restoration islands such as Makaro/Ward. They also compete with nectar-eating birds for food taking nectar from plants such as flax.

Starlings gather in groups and prefer artificial areas such as flat grass lawns. A good way to discourage these pests is to plant densely with native plants, resembling natural bush land. Keep grass lawns small or let them grow wild. 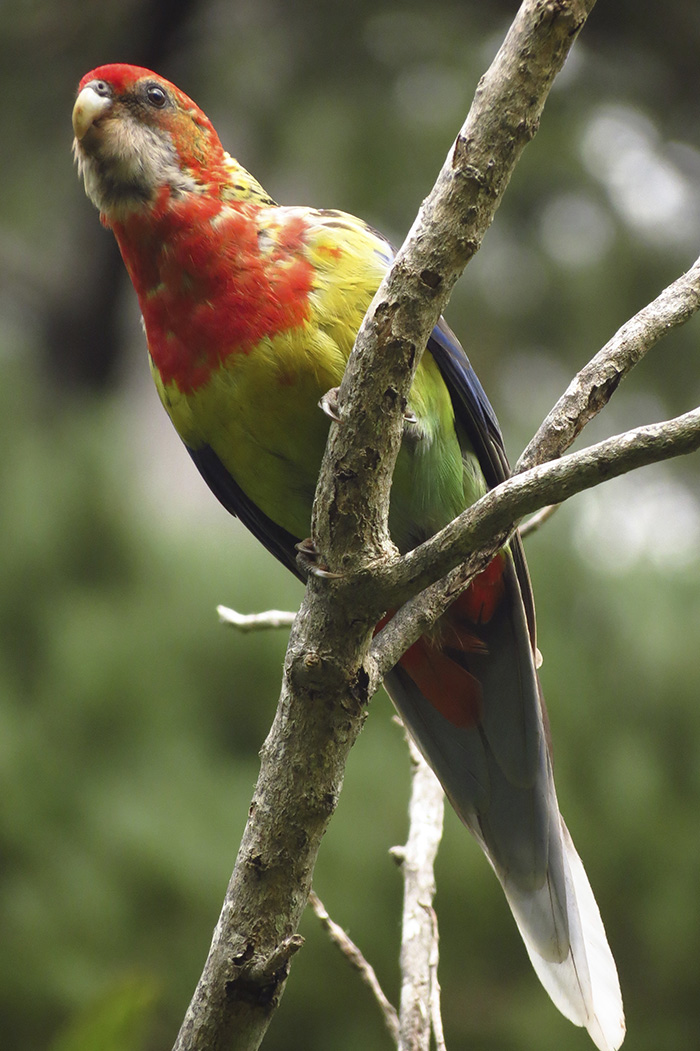 The eastern rosella is a brightly coloured large parakeet native to south-eastern Australia. With red heads and breast, with white cheek patches they are easy to identify. Their lower breast is yellow changing to green on abdomen and rump.They have black-edged, mottled feathers, with yellow or greenish-yellow coloration on back and wings.

It was introduced to New Zealand in the early 1900s with reaching Wellington in the 1960th. Eastern rosellas can have detrimental effects for native parrots through spreading parrot-specific disease organisms. North Island rosella populations have been found to carry Beak and Feather Disease Virus (BFDV), a parrot specific virus which is harmful to native parrots like kakariki.

Rosellas have been seen feeding with red-crowned kakariki in a mixed flock on the ground. Additionally, they compete with native species for food and/or tree cavities, which they nest in. Rosellas also cause damage to grain and fruit crops in New Zealand, including stripping flowers from some fruit trees. Seeds are a major component of the diet of rosellas.

Each autumn. young native birds fly out from their parents’ territories, looking for a new place to settle. Imagine flying over…

By providing the right habitat, many birds, butterflies, lizards and native bees will find your garden more attractive than the surrounding…

What makes a weed?

What is a weed? How do weeds cause harm? Which weeds are Miramar’s worst? Stop the weed invasion! What is a…